There is more to New York than Manhattan. While visiting New York go to Brooklyn and be sure to visit Bedford- Stuyvesant (abbreviated Bed – Stuy) the central district of Brooklyn.

Go to Bed-Sty now, before it disappears. Before it changes, like other districts of New York. Now is the best time. It ‘s safe but still there are no luxury glass apartment towers or hipsters on skateboards, or annoying owners of start-ups, or Wolf of Wall Street wannabes.

Go there now before Bed – Stuy loses its unique character. Before restaurants with fried chicken are pushed away by tofu and sushi. Before the beautiful old buildings have been demolished by glass buildings. Now this area is teeming with life.

For decades, Bed – Stuy was a cultural center for the African-American population in Brooklyn. The present inhabitants are still primarily African- Americans, but there is also a significant population of Puerto Ricans and Dominicans .
In a way, it is similar to what Harlem is to Manhattan.

Interesting fact – in 1936 Harlem and Bedford were officially connected by the subway line, known to most of us from Duke Ellington’s song ” Take the A Train ” .

Bed – Stuy through the years has been a forgotten district of New York. In the twenties it was the birthplace of jazz. Later became the center of rap following the success of Jazz Z and Notorious BIG.

In the 70s and 80s , this area was very dangerous and shunned by all. Even Billy Joe in his 1980 song “You May be Right” includes “walk[ing] through Bedford-Stuy alone” in a list of foolhardy things the singer had done.

Due to the crime, drugs, poverty and neglect, Bed – Stuy missed the biggest investments. And it is now one of the few places in New York, where you can see how New York looked like in the early century. Great Victorian houses have not been demolished, and have survived almost untouched.

Last Saturday we went for a walk around Bed – Stuy, and ” we found ” Akwaaba Mansion, a beautiful free- standing architectural gem from 1860 , which is now one of the loveliest Bed & Breakfasts in New York. The meticulously restored Italianate villa features exquisite architectural details and modern-day amenities, including private baths with Jacuzzi tubs 🙂

We stopped for brunch at Peaches, a very trendy restaurant in Bed-Stuy, where we enjoyed a free jazz concert.

The most beautiful Victorian town houses are clustered at Tompkins and Stuyvesant avenues.

Recently the New York City Landmarks Preservation Commission described Bed-Stuy as “an extraordinary well-preserved late-19th-century streetscape” and the city seeks to create a historic district there. 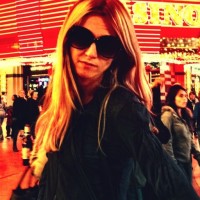